The Oxford-AstraZeneca vaccine has been approved for use in the UK, with the first doses due to be given on Monday.

There will be 530,000 doses available from next week, and vaccination centres will now start inviting patients to come and get the jab.

Priority groups for immunisation have already been identified, starting with care home residents, the over-80s, and health and care workers.

It comes as millions more in England are placed in tier four restrictions.

The UK has ordered 100 million doses of the new vaccine – enough to vaccinate 50 million people.

Eventually all over 50s and younger adults with health conditions will be offered a jab in the first phase of the rollout – more than 25 million people in total.

It is hoped that about two million patients a week could soon be vaccinated with two vaccines now approved.

On Tuesday, 53,135 new Covid cases were recorded in the UK – the highest single day rise since mass testing began – as well as 414 more deaths within 28 days of a positive test.

The Medicines and Healthcare products Regulatory Agency (MHRA) has authorised two full doses of the Oxford vaccine, with the second dose to be given four to 12 weeks after the first.

The immunisation campaign will now shift to giving as many people as possible their first dose of vaccine with a second dose following within that period.

When the Pfizer-BioNTech jab rollout began, the aim was to give the second dose after three weeks.

But based on advice from the Joint Committee on Vaccination and Immunisation, the aim now is to give as many vulnerable people some protection from Covid-19, irrespective of the jab they are given.

The Oxford vaccine is easier to store and distribute, as it can be kept at normal fridge temperature unlike the Pfizer-BioNTech jab that has to be kept at -70C.

There is also more confidence about supply as it is UK-made, whereas the Pfizer-BioNTech jab has to be shipped in from Belgium. 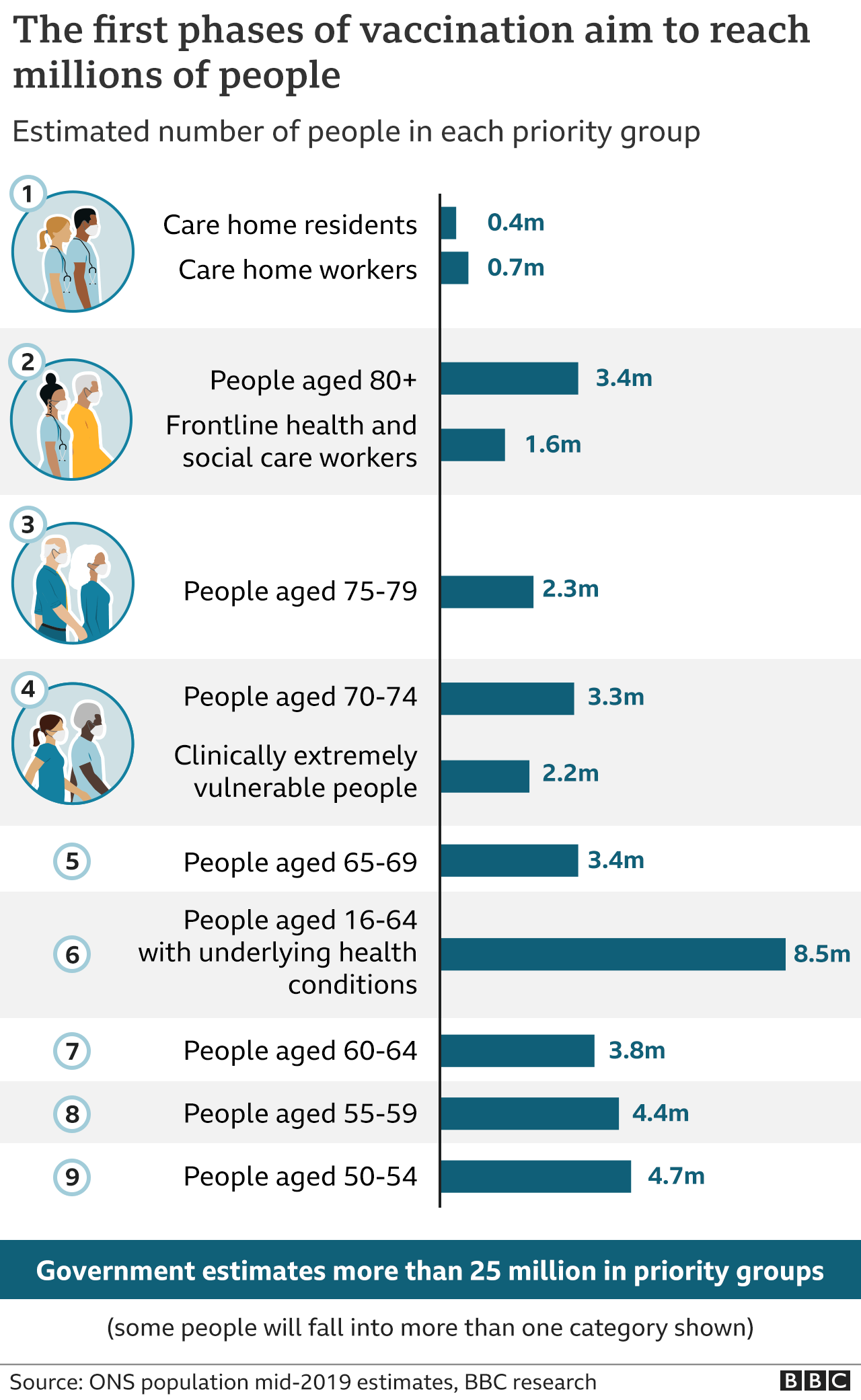 Pregnant and breastfeeding women can now take either of the two approved coronavirus vaccines “when the potential benefits outweigh the risks”, experts said at an MHRA news conference.

The Pfizer/BioNTech vaccine can also now be administered to people with a wide range of food and medicine allergies, but people allergic to ingredients in the vaccine should not take it.

Dr June Raine, chief executive of the MHRA, told the briefing that “no corners have been cut” in assessing the safety and effectiveness of the Oxford-AstraZeneca jab.

Prime Minister Boris Johnson has hailed the latest vaccine development as “a triumph” for British science, adding: “We will now move to vaccinate as many people as quickly as possible.”

And England’s chief medical officer Chris Whitty praised the “considerable collective effort that has brought us to this point”.

Mr Hancock told the Commons the vaccine’s approval was “a huge British success story “, and “the single biggest stride that we’ve been able to take since this pandemic began.”

Speaking on the BBC earlier he said the UK now had enough coronavirus jabs ordered, including the Pfizer vaccine, to vaccinate “the whole population”.

But he said there was still “more work to do”, warning: “It’s not over yet.”

“Our colleagues in hospital are facing some real horrors caused by this virus. The next steps are critical,” he said. 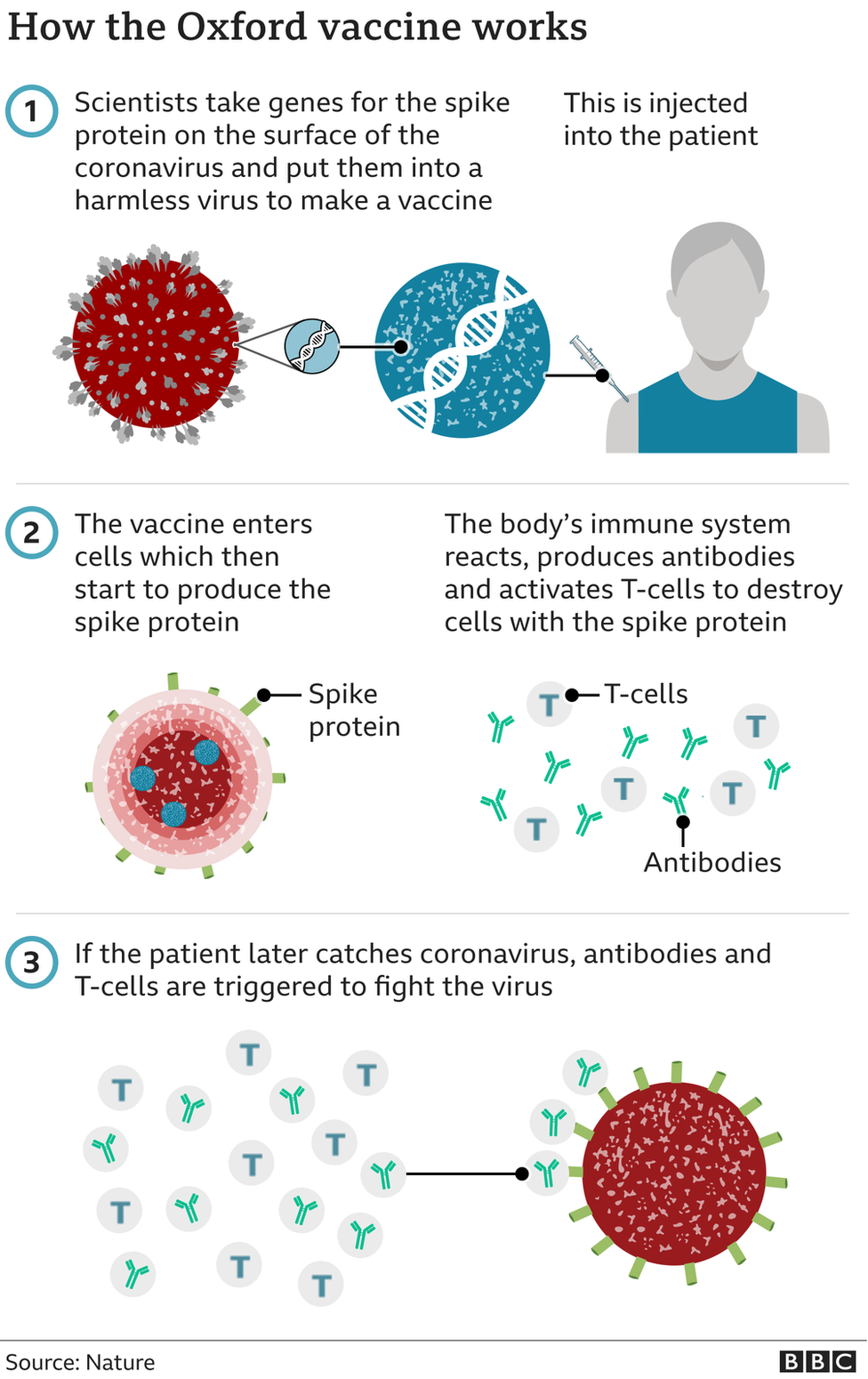 Trials showed two full doses of the Pfizer-BioNTech jab were 95% effective at preventing infection, while the Oxford-AstraZeneca vaccine showed 62% effectiveness – although even in cases where people were infected, there were no cases of serious illness needing hospital treatment.

Trials of the Oxford-AstraZeneca vaccine also showed that when people were given a half dose then a full dose, effectiveness hit 90%.

But there was not enough clear data to approve the half-dose, full-dose idea.

However, unpublished data suggests that leaving a longer gap between the first and second doses increases the overall effectiveness of the jab – in the sub-group given the vaccine this way it was found to be 70% effective after the first dose.

All the vaccines are expected to be equally effective against the new variants of the virus that have emerged.

More than 600,000 people in the UK have been vaccinated with the Pfizer-BioNTech jab since Margaret Keenan became the first person in the world to be given a Covid vaccine outside a clinical trial.

The new vaccine approval comes after Public Health England said the country was facing “unprecedented” levels of infections, and health officials in parts of Wales, Scotland and the south of England voiced concerns about the increasing pressure on the NHS.