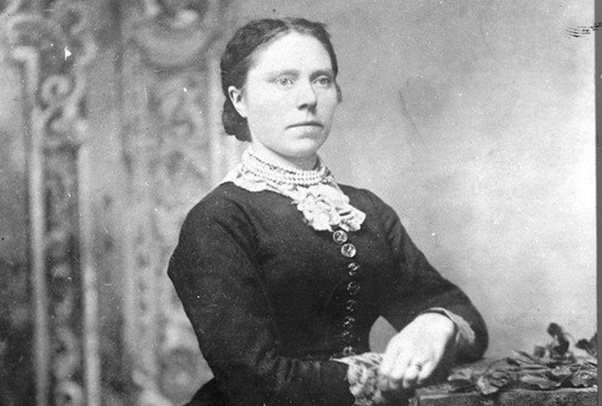 Belle was born either Bella Paulsdatter or Brynhild Paulsdatter Størseth, on November 11, 1859, in Norway. She immigrated to Chicago, Illinois in 1881. Eventually, she settled down at a small farmhouse she bought in La Porte, Indiana.

The beginning of our story needs to start at the end of her story, her death. On April 28, 1908, police were called to fire out on Belle’s farm. Once the blaze was out the police discovered the bodies of an adult female and three children.

Assuming that the bodies were Belle’s and her kids, she was originally portrayed as a hero. They described her in the local paper as a hard-working widow with three kids that had tried valiantly to save her children from an accidental fire until she herself succumbed to the flames. With a little digging though, it didn’t take long to find out otherwise. Belle with her three children. It was initially assumed that the bodies burned in the fire at Belle’s home were those of her and her children.

It was discovered that Belle was married for the first time in 1884, to a man named Mads Sorenson. Belle and Mads owned a small candy store. Things looked a little odd when both the couple’s candy store and the home went up in flames, giving them payouts on what were considered to be extremely high dollar insurance policies at the time. It looked even odder when Mr Sorenson died shortly after from an apparent brain haemorrhage while also having a large insurance policy that Belle had gotten on him. The insurance company did an investigation but could find no proof that they weren’t accidents, so they dropped the investigation.

The second husband/probable victim, and the only man whom Belle would take the last name of, was Peter Gunness. They were married in early 1901. Peter wouldn’t make it to 1902. Eight months after marrying Belle, Peter was killed “accidentally” when a meat grinder fell on his head, fracturing his skull. At least that’s the story that Belle told police. Again, the police couldn’t find any evidence to prove otherwise.

Now let’s fast forward again to shortly after Belle’s supposed death. A brother of one of the victims came to the farm to search for clues about his missing brother after finding letters with correspondence between the brother and Belle. After searching some, he noticed some loose soil in the pigs pen. The man began digging and came across hands, feet, and to his horror, the severed head of his brother! 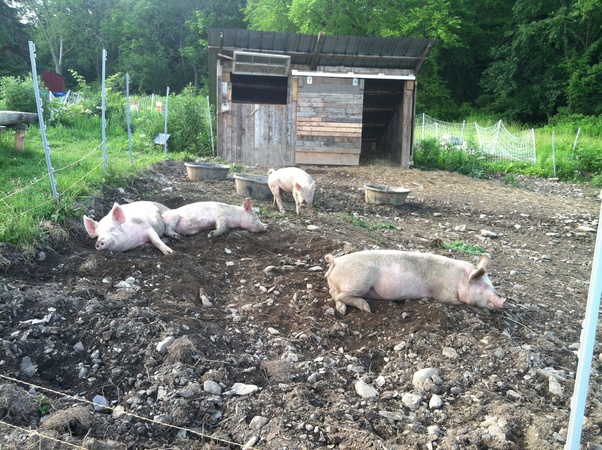 After the brother of Belle’s final victim found correspondence between the two, he searched the Gunness farm and to his horror, found the decapitated head of his brother buried in the ground under the pigpen.

The man contacted the police and after a further search, bones were found scattered in the ground all over the property. Some in the pigpen, some down by a lake on the property, some were right by the house in the front yard. It’s believed that they found all or part of the bones for eleven different people. All the bodies had been dismembered in the same way, decapitated, arms removed at the shoulders, and legs cut off at the knees.

It was a gruesome scene for those who witnessed it, apparently. Lucas Reilly, a reporter for the local newspaper at the time, said about the scene, “The bones had been crushed on the ends as if they had been struck with hammers after they were dismembered. Quicklime had been scattered over the faces and stuffed in the ears.” 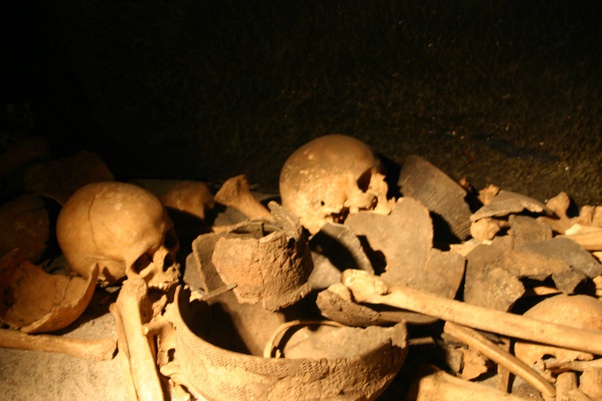 Eventually, a hired hand of Belle’s named Ray Lamphere was arrested for all of the murders, including those of Belle and her children. Ray gave a detailed statement to police confessing to being an accomplice to the murders but said that the mastermind behind the murders was Belle herself.

He told police the entire story in a confession. He told them that Belle would place ads in different newspapers seeking men for companionship. Once a man had moved out there, she would kill them, rob them, and he would bury the body parts throughout the yard. When the brother of the last victim contacted her about coming to search for clues, she knew the bodies would soon be discovered. Lamphere said she paid him to dig up a female corpse, put it in her house, and set it on fire, with her own children inside. Belle had fled and Lamphere didn’t know where she was. The only problem with Lampheres story was the lack of a motive. The men that answered the ads weren’t wealthy and didn’t bring many possessions with them in the majority of the cases. 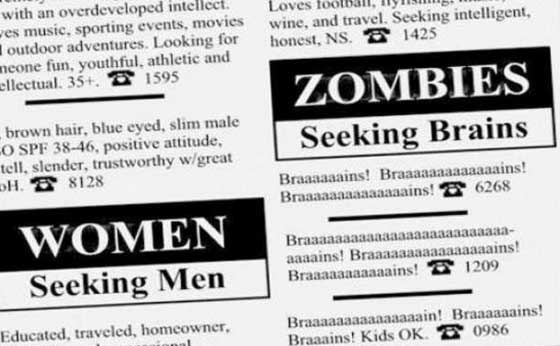 A local journalist named Edward Bechly was persuaded by police to try and obtain a second confession from Lamphere in secret, which he supposedly did, but through a second-hand account. The police didn’t want people to believe this woman had gotten away scot-free with murdering all of these men, and her children on top of that. So the details and circumstances surrounding the second alleged confession are shady at best and most people aren’t certain of its authenticity. In the second confession though, Lamphere says that he and Belle were both in on the murders, but that he had ended up killing Belle and her children for unknown reasons, and then burning the house down to try and destroy any evidence. He apparently had an accomplice in the second confession as well, a lady named Elisabeth Smith, who was arrested based solely off the flimsy confession. I assume they were tried and convicted for the murders, but I can’t verify that as fact.

Whether Belle escaped justice or not? Exactly how many men did she kill? What the motive was behind killing and robbing of these men for so little? These are questions that we’ll never be quite sure the answer to. What we are sure of is the fact that Belle was a murderer and definitely one of the evilest women in history. Belle also holds the distinction of being America’s first known female serial killer. Not only that, she was actively killing men before H.H. Holmes killed any of his victims. Making her not just the first female serial killer in America, but America’s first serial killer period.

The simple fact is that Belle killed a lot of men for almost no reason whatsoever, just a few dollars and the knowledge of what she had done. If that wasn’t evil enough, she killed her own children in the evilest and torturous way possible! It doesn’t get more evil than killing just for the thrill of it. That’s why she’s my pick for the evilest woman in history.